an exhibition at GAM, in Milan

GAM – Galleria d’Arte Moderna di Milano, dedicates an exhibition to Joe Colombo, a visionary genius who left us a great design legacy. Dear Joe Colombo, You Taught Us the Future, curated by Ignazia Favata and organized by Suazes with the Galleria d’Arte Moderna di Milano and the Joe Colombo Archive, from May 24 to September 4, 2022, illustrates the evolution of his story and his constant interest in new forms of progress.

Among the most extraordinary designers in Italian history, Joe Colombo was born in Milan in 1930, and there he developed his short but dense design career. Sadly, in fact, Joe Colombo died at only 41 years old. By the time he was a student at the Brera Academy of Art and the Milan Polytechnic, he had devoted himself to Nuclear Art and frequented the artists Enrico Baj and Sergio Dangelo. From 1951, he participated in the various exhibitions of the Nuclear Movement. In 1963, he received the IN-ARCH award for furnishing a hotel in Sardinia, and in the following year, at the XIII Triennale, he received a gold medal for the ACRYLIC lamp and two silver medals for the COMBI-CENTER and the MINI-KITCHEN.

The exhibition tour starts with his early experiences in the 1950s, his membership in the Nuclear Art Movement, and the first project of the Nuclear City, in which one can find a residential city and a subway city with cars, services, warehouses, and subway. The death of his father and his necessary involvement in the family business lead him to a radical change with the abandonment of the artistic world and the encounter with the industrial one. Still, the experience proves crucial for Colombo, who learns construction and production techniques and encounters new plastic materials. After a few years, in fact, he gave up the business and opened his first studio in Milan. The 1960s opened with the IN-ARCH award for the methacrylate false ceiling in the Continental Hotel in Platamona, Sardinia (1964), and the design, with his brother Gianni, of the Acrilica lamp for O-Luce, with which he won the gold medal at the XIII Milan Triennale (1964).

His insights, together with practical applications of new materials, led him to come up with design objects with new shapes and materials and innovative ideas about future ways of living.
These include the Programmable System for Living, or multifunctional monoblocks such as the MiniKitchen for Boffi and the Box 1 for La Linea. He also designed some futuristic landscapes, such as Visiona 1 for Bayer, presented in Cologne in 1969, the Total Furnishing Unit for the exhibition Italy: the new domestic landscape at MoMA, or his own house in Via Argelati in Milan. All pictures are courtesy GAM-Milano.com 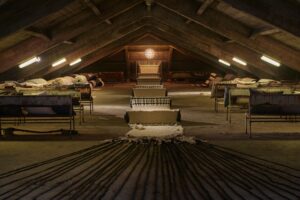 The House of Lyria 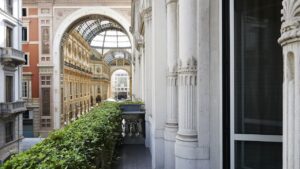 10 Hotels in Italy for summer holidays 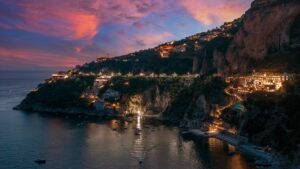