in Trieste, an ancient jewel

In the seventeenth century, in these rooms were lodged nobles of the highest rank, such as the Archduchess Maria Maddalena of Austria, wife of Cosimo de’ Medici, Grand Duke of Tuscany (1608), the Infanta Maria of Spain, wife of Ferdinand I (1631), Federico Gonzaga, Duke of Mantua (1662), the Emperors Joseph II and Leopold II. Moreover, many famous guests stayed here, such as Admiral Orazio Nelson, Lady Hamilton, the archaeologist Giovanni Gioacchino Winckelmann, Giacomo Casanova, Carlo Goldoni, Gioacchino Murat, and Prince Bernadotte.

Today, architect Egidio Panzera designed the renovation of the entire building, including the facades. The aim of the new project was to leave intact the spirit of the place and its cultural heritage. For this reason, materials and colors typical of the Habsburg interiors were chosen, such as the green, red and blue of the new hall. Local materials and ancient techniques, such as Venetian brocatelle weaves, Rosso Verona and Fior di Pesco Carnico marbles, and the manual decoration of the wooden parts, distinguish the other spaces of the hall, the lounges and the staircase.

The rooms are based on two different concepts. The first concept provides the installation of some rooms of a volume that encloses the walk-in closet and the bathroom, highlighted by vertical and horizontal reflecting surfaces. This treasure chest is dressed with noble materials such as Rubelli’s damask drapes, fiberglass wallpapers, and floor mosaics. Instead, the walls of the room are marked by plaster frames and feature the same colors of the bed fabrics, upholstered furniture, and Dedar satin curtains.

On the other hand, the second concept creates a contrasting reception and service space, separate from the sleeping room. A door, hidden between the plaster frames of the room, divides the two areas. The space is contemporary and, at the same time, classic, thanks to the precious material surfaces, dark wood ceiling, Venetian floor, cement resins, and above all, a marble wall. A diaphragm of decorated and acid-etched glass divides the entrance-cabin area from the bathroom, while the walk-in closet, located in a niche, picks up the colors of the marble veins. In the sleeping area, plaster frames dominate, surrounding walls of marmorino; the plain-colored carpeting with iridescent reflections is in harmony with the satin curtains, in classical colors. 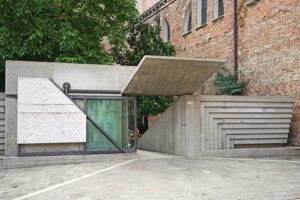 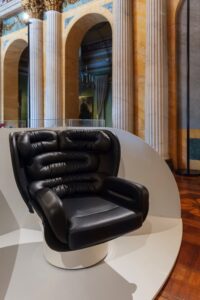 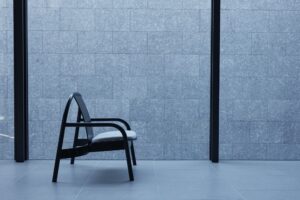